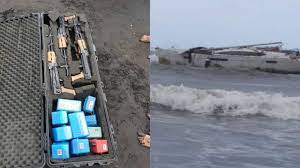 –On Thursday, a suspicious boat was found off the Raigad coast in Maharashtra with three AK-47 rifles and bullets.

–More than 190 km from Mumbai, some locals spotted the boat in the Shrivardhan area and alerted security agencies, having no crew member.

–Ashok Dudhe, Raigad Superintendent of Police, and other senior officials rushed to the spot and searched the boat.

–The officials said that three AK-47 rifles and some bullets were found on the boat and that the police were conducting further investigation.

A boat without an identification was found at Harihareshwar Beach and a lifeboat was found at Bharadkhol in Raigad district. There is nobody on either of them.The Coast Guard and Maharashtra Maritime Board have been informed of the same.”The Raigad police said that the Police Department is taking the necessary action.”

According to officials, the crew members of this boat were rescued in June this year near the Oman coast. The Raigad coast was the final destination of the boat, as per the police.

A Maharashtra ATS team has moved to Raigad district where a suspicious boat with weapons was found at Harihareshwar Beach. Security has been tightened in Raigad district and nearby areas.

An investigation by the police is currently in progress.