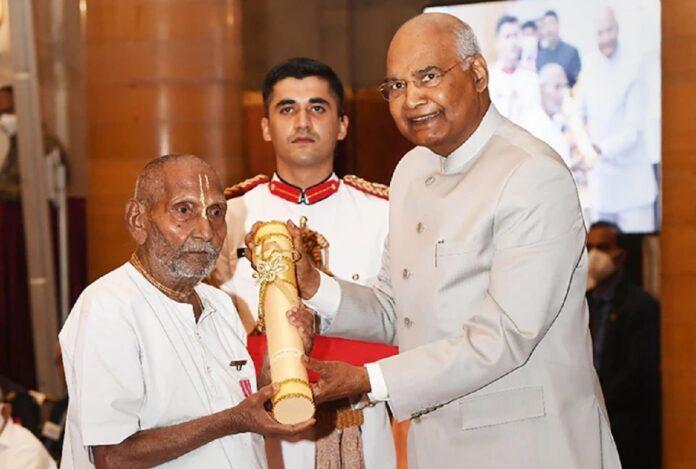 The Padma Shri Award is India’s fourth-highest civilian honor of India. On March 21, 2022, Swami Sivananda was awarded “Padma Shri”. He was recognized as World’s oldest man on 5th April 2022, by the World Wide Book of Records.

Walking bare feet in the Palatial Darbar Hall of Rashtrapati Bhavan, Yoga guru Swami Sivananda received a standing ovation when he received the “Padma Shri” award from President Ram Nath Kovind. Dressed in white kurta and dhoti, Swami won hearts when before receiving the award, the yoga guru prostrated before Prime Minister Narendra Modi and the President, receiving more rounds of applause from the guest at the civil ceremony.

Returning the greeting, Prime Minister Modi promptly bowed down. Swami Sivananda receives Padma Shri for his immense contribution to the field of yoga from the President.

Swami Sivananda has devoted his life to human society. Born on 8 August 1896 in Sylhet district (now in Bangladesh) of undivided India, Swami Sivananda lost his parents and sister at the age of six. Due to abject poverty, his parents could feed him mainly boiled rice water during his childhood days, and sometimes he slept on an empty stomach. After losing his parents, his relatives gave him up to a spiritual guru who brought him up at his Ashram in Nabadwip, West Bengal. Omkarananda Goswami transmits him practical and spiritual knowledge, including yoga. Without school education.

He has been a hopeful thinker throughout his life. ‘The world is my home, its people are my fathers and mothers, to love and serve them is my religion’– this has been his faith.

Believes in serving the world

Swami Sivananda dedicated his life to society. He is a monk from Varanasi. For the last 50 years, Swami Sivananda has been serving 500-600 leprosy-affected beggars with dignity at Puri by personally meeting at their places. He follows that mission till today to serve the underprivileged in different parts of the country. He organizes different materials like food, fruits, clothes, winter garments, blankets, cooking utensils based on their expressed need,” it said.

The secret mantra to a healthy lifestyle

His healthy and long life has drawn attention from across the globe, including his commitment to motivating countrymen for COVID vaccination. His every day involves waking up at 3 am, doing yoga, eating oil-free and boiled foods, and selflessly serving society.

Swami sleeps on a mat on the floor and uses a wooden slab for a pillow.

Swami has traveled across 34 countries with his Guru Goswami to teach yoga. He recognizes his disciplined life as being disease-free. Swami Sivananda has received numerous awards including the Yoga Ratna Award in 2019 at Bengaluru.

He was rewarded the Basundhara Ratan Award by Respect Age International for his contribution to society on 30 November 2019.

10 Awesome Summer Coolers, To Beat The Heat! Must drink in...

How To Prevent Toothache Naturally