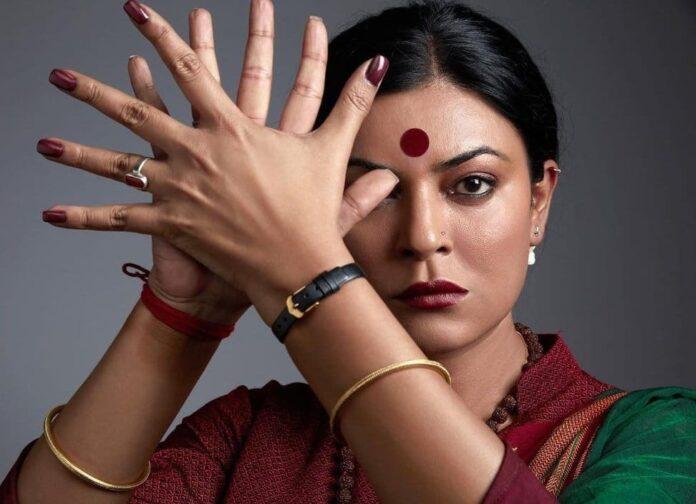 Sushmita Sen has shared the first look of her new web series Taali, in which she plays the role of transgender activist Gauri Sawant.

The web series is based on the life of Sawant, who has been working towards the betterment of the transgender community in India.

In the first look, Sen is seen sporting a bindi and a saree, with her hair styled in a traditional bun. She looks fierce and determined in the character poster, and we can’t wait to see her in action.

Sen took to Instagram to share the poster, and she wrote, “Gauri Sawant…a woman of extraordinary courage and compassion! It is my honour and privilege to bring her story to you through #Taalitheseries.”

sushmita sen further added, “Nothing makes me prouder than to play a small part in her journey…a story that needs to be told! Coming soon.”

fans are definitely excited to watch this web series, and we hope it will help spread awareness about the struggles of the transgender community in India.

Sushmita Sen has successfully managed to change her career through OTT. The former Miss Universe, after headlining the enormously successful Aarya on Disney+Hotstar, is now shooting for a new series. Taali is its name.

It was announced last week that the series is being made by Voot Select and it has been in buzz since then. Taali, a biopic, is going to be based on the life of transgender activist, Shreegauri Sawant. In Hindi, “taali” means clap.

Transgenders in India are often stereotyped as a community that claps near people while asking for money. She not only broke the stereotype but went on to become the mother of a girl who was left alone to be sold in the marsh of prostitution.

“Kaisi Yeh Yaariaan” Season 4 Manik and Nandini’s is back.

You can now watch “Sita Ramam”movie in hindi language.