The Spin Bowler You Need to Know: Nicky Boje 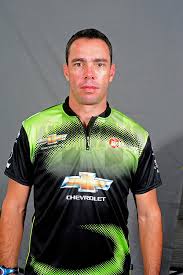 Nicky Boje is a spinner bowler who has played cricket for South Africa and Northerns. He is currently signed with the Eagles cricket team.

Boje has always been a canny bowler, able to swing the ball both ways. He took 3 for 43 in the first innings of his Test debut, against Australia at the Adelaide Oval. He took his best Test bowling figures of 5 for 63 against Bangladesh at Dhaka in 2002-03. He also took 5 for 38 against Pakistan at Centurion in 2002-03, and 5 for 33 against the West Indies at Port-of-Spain in 2006-07.

Boje played in 116 ODIs, scoring 2,662 runs with a batting average of 26.73. He made two centuries, both against Bangladesh. He also took 111 wickets with his off-spin bowling, with best figures of 5 for 38.

Nicky Boje had a wife and two children. He was a family man and he loved his family. When he was not playing cricket, he was spending time with them. He was a dedicated father and husband. He was always there for his family when they needed him. He was a good role model for his children. They looked up to him and were proud of him. He was a great husband and father.

Boje had a successful domestic career, winning the domestic championship with three different provinces. He was also named domestic player of the year twice, in 2004/05 with the Highveld Lions and in 2007/08 with the Warriors.

Boje was a part of the Rajasthan Royals for the first three seasons, then moved to the Chennai Super Kings for the next three.

Boje was also part of the Chennai Super Kings squad that won the IPL in 2010. He played in all 14 of the Super Kings’ matches, taking 16 wickets at an average of 20.37.

Nicky Boje is regarded as one of the most successful South African cricketers of all time. He played 71 Tests and 169 One Day Internationals for South Africa, and took 191 and 515 wickets respectively. Boje was also a part of the South African team that won the 2007 Cricket World Cup.

Some of Boje’s most notable achievements include:

– becoming the first South African to take a Test hat-trick

– being the only South African to take a wicket in all six World Cup matches in which he played.

Nicky Boje is a South African cricketer who played international cricket for the Proteas between 1998 and 2006. He is also a philanthropist who has a foundation that helps underprivileged children in South Africa. In 2013, Boje was honoured with the Order of Ikhamanga, for his services to cricket and charity.