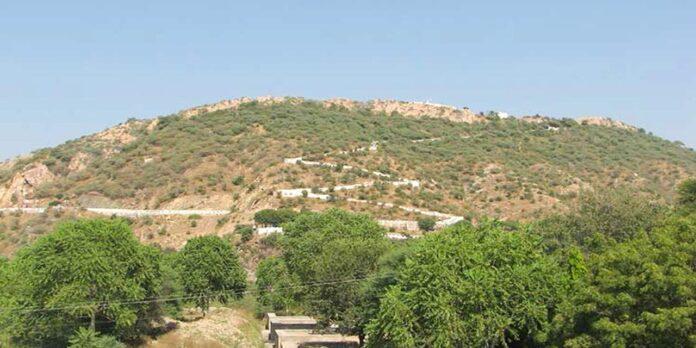 What is Govardhan Parikrama?

Govardhan Parikrama, also known as Govardhan Puja, is an important Hindu religious festival. It celebrates the importance of Lord Krishna, and the victory of good over evil. The festival is celebrated by walking around the Govardhan Hill, in the Mathura district of Uttar Pradesh.

There is a sacred destination located in the district of Mathura, Uttar Pradesh – Govardhan Parvat, a hill which is believed to have been lifted by Lord Krishna on his finger.

Round the world, devotees come to this place every day to circumambulate the hill. A large gathering can be witnessed on the pious occasions of Guru Purnima and Govardhan Puja; however, this is not always the case. The parikrama is 23 km and takes 5-6 hours to complete.

The journey starts at Manasi-Ganga Kund and leads to Radha Kund Village while performing a pilgrimage to Lord Harideva. The devotees then take the Vrindavan Road to the parikrama path.

A number of important holy sites are covered route to this highly sacred pilgrimage in Uttar Pradesh; these include Radha Kund, Shyama Kund, Daan Ghati Mandir, Mukharvind, Kusuma Sarovar, Rinamochana, and Puchari. There is no fixed time limit to complete the parikrama.

The mythological significance of this entire pilgrimage dates back to the time when, according to legend, Lord Krishna lifted the Govardhan Hill on his little finger to protect the people of the region from the wrath of Lord Indra (the rain god). Because this incident made Govardhan a blessed hill, it is believed that circumambulating it will sanctify someone from all sins.

The significance of Govardhan Parikrama is immense. It is not just a physical pilgrimage but also has a deep spiritual meaning. Lord Krishna performed this parikrama to protect the villagers from the devastating effects of a natural calamity.

By walking around Govardhan Hill, He created an artificial hill which acted as a shield against the wind and rain. This pilgrimage also helped to reaffirm the Lord’s supremacy over all other gods.

If the ritual of Govardhan Parikrama is performed with milk, it is considered even more sacred. In the ritual, a pot with a hole at the bottom is carried by devotees and remains filled with milk.

In one hand, the pilgrim carries the pot of milk as they perform the parikrama of the popular Hindu pilgrimage site of Govardhan Hill. In addition, another pot of incense smoke (dhoop) is also held by the devotee in another hand. A person escorts the devotees throughout this sacred journey of Govardhan Parvat, ensuring the pot is filled with milk until the parikrama is complete.

What is the Best Time to Visit it ?

The parikrama can be performed year-round. The winter season is the best time to do Govardhan Parikrama. The winter season enjoys a pleasant weather condition which remains in favour of tourism, unlike summer and monsoon. The season starts in October and lasts until March.